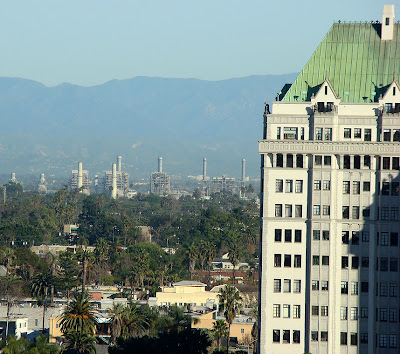 The two stacks just to the left of the building are “B Control,” where Jim and I worked.
I worked with Jim for many years at Haynes Generating Station. We made electricity. We were part of Crew 4, one of the operating crews that manned the station around the clock. We worked rotating shits: Ten day shifts (6:30-2:30), four days off, 10 peaks (2:30-10:30), four days off, 10 graveyards (10:30-6:30). Except that after the last grave, if you stayed up all day, you could “cheat the company” and have a five-day weekend without using up any vacation time. There were about 14 of us on the crew, staffing three control rooms. Monday through Friday day shifts were all business, since the plant was busy with maintenance, administration, training. But the rest of the time, if nothing special was happening, we just had to keep an eye on things, with about two hours of actual duties. There was a lot of conversation, cooking and surreptitious reading. We got to know each other pretty well over the years.
Jim and I were probably the best-read guys on the crew, and we recommended books to each other and often discussed what we were reading. Occasionally he would join the hikes I put together after the last graveyard. A bunch of us would go out to breakfast, then drive up to the San Gabriels northeast of LA, instead of going home an getting some sleep. It was a little rough, but it smoothed the transition back to diurnalism.
I retired in 1998 at 51. The DWP had a harebrained scheme to save money by offering generous early retirement terms that I couldn’t resist. Jim left that same year, forced out on a disability retirement after he was diagnosed with multiple sclerosis.
MS is a terrible and mysterious disease that eats away the myelin, which is like the insulation on the nerve cells. When it’s gone, the nerve cells lose their ability to conduct messages. Since everything we do depends on these signals, you lose one function after another as the disease progresses. Jim used to jog and bike – and drive – until MS robbed him of his ability to balance and see. He used to play guitar, studying Bach transcriptions and Eric Clapton. Cleaning up his apartment, I’ve thrown away many handwritten play lists stuffed in every drawer. What Jim was practicing until the disease robbed him of that ability as well. And he used to read, before the myelin on his optic nerve deteriorated. He read a lot.

After he retired, Jim continued to live alone in his Long Beach apartment. We would get together every month or two, go out to eat, sometimes see a movie. Larry, another Crew 4 alumnus, would sometime join us. In recent years, Jim would call me when something he couldn’t deal with came up, and I would help him out. His coffee maker, answering machine or tv stopped working, so I would pick up a new one for him and set it up in his apartment.

In December, he fell while making his way around the apartment. He tried to deal with the pain (mostly with aspirin and vodka), but after a couple of days he called and I took him to emergency. He had fractured a vertebra, and also developed pneumonia and esophageal bleeding. He was a wreck. He spent a week in the hospital, and a couple more in a hellish convalescent facility. It was clear he could not go back to his independent apartment living in the near future, and that realistically probably not at all. (He still doesn’t agree with this, and hopes to resume living on his own. We’ll see.) I found an assisted living facility, helped him move in, and I’m trying to get him moved out of his apartment so he won’t have to pay rent for nothing.

The saddest and most interesting task has been to liquidate his library…boxes and boxes of books collected, saved and READ over many years.

Remember Episode 8 of the Twilight Zone, which first aired Nov. 20, 1959? I’ll bet you do!
Time Enough at Last, in which Burgess Meredith gives a great performance as a bookish bank teller harassed by his employer and his wife for wasting too much time reading. While hiding in the bank vault to read, an h-bomb destroys the city. All that’s left is him and the ruins of the public library. At last! Time enough to read to his heart’s content. Then he trips over the rubble. His thick glasses fall and are shattered. 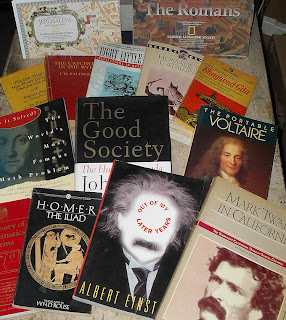 Doris Lessing, Mark Twain, Richard Feynman, Kierkegaard, Merton.
One by one, I go through his boxes of books, long since stored away because he could no longer read them. A few titles I put aside for myself, even though I don’t have any room for more books. The balance will go to the friends of the library for their book sale.
David Hume, Lao Tzu, Vonnegut, Crichton. The Portable Enlightenment Reader.
Every day he thinks of a new title he wants me to put aside in case he’s able to get a device that will allow him to read again. Viking Portable Mark Twain, The Mathematical Handbook, Surely You Jest, Mr. Feynman!” So I go through the pile again, looking for his requests. 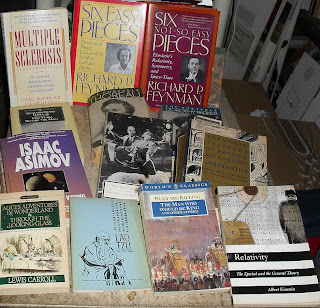 Selected Masterpieces for the Classical Guitar. Eric Clapton Unplugged, Chet Atkins Note-for-Note.
Dickens, Ibsen, Mann, Dillard, Gould, Thoreau.
The Good Society, by John Kenneth Galbraith.
The depth and breadth of the collection only underscores what a profound thing has been taken from this man by MS.

It breaks my heart.